Take a look inside my head

On 20 February 2006 the world changed forever.
Maybe you didn’t notice, but the world as I knew it shifted slightly to the right.
Alexandra Isabella was born at 06:50 and promptly altered the state of the universe to suit herself. 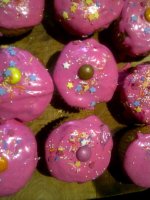 Today is her sixth birthday and like most mothers, I suffer from party panic.
You may scoff, but I have been to parties where the mother has broken down into hot tears of hysteria because the kids didn’t want to pin the tail on the donkey.
I have spent sleepless nights baking elaborate birthday cakes in the shape of the Sword of Omens and a robot.
I have iced 100 small pink cupcakes and stuffed party packs full of toys and candy from China Mall.
Each year there is a not-so-subtle parental competition – one that usually ends with you substantially poorer. You can easily end up spending as much on a birthday party than you did on your own wedding – only Daddy doesn’t pick up this bill. 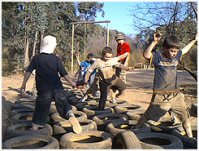 I have been to a party where one of South Africa’s premier soccer teams played ball with a bunch of 7 year olds. Former State President Nelson Mandela made an appearance at one.
I don’t bother even trying. I sent the boys to bootcamp to wallow in the mud and be yelled at by ex-Navy Seals. They go hone happy,exhausted and covered in mud. Most the time they are happy with a water pistol and a jumping castle.
Girls are harder.
This year as I was lamenting the impending day with gloom, the power of social networking led me to a review by Shelli Nurcombe-Thorne who knows more about Johannesburg than anyone I have ever met.

Largely because she writes a Joburg blog about it. She had just reviewed a kids’ photo studio and promptly sent me the details of Nina Say Cheese.
Lexi and her best friend were duly collected on Saturday afternoon and chauffeur driven (by me) to the studio of Nina Say Cheese in Fourways.

Vanessa Lewis is a professional food photographer, but was inspired to start a children’s studio after the birth of her daughter, Nina.
She offers four magical sets, an aeroplane hanger, a circus, a forest and a tea party.
She also provides delicious cookies and macaroons from a real pastry-chef.
The girls put on identical pink ruffled skirts, pretty tops and sparkly shoes. Suddenly these two scruffy little tomboys blossomed into the most beautiful and ladylike little girls. They posed, they played and they laughed and laughed and laughed.
I haven’t got the pictures yet, but I know they will be beautiful.
So all-in-all it was a good way to celebrate without having to entertain 25 small girls and their 50 associated parents.
Social networking again helped me out on the birthday present front. Having expressed interest in a Barbie Bride at a friend’s house,her mom called to tell me about the best place to buy Barbie clothing.

Hint: It is not Toys R Us.
The Rosebank Market on a Sunday is home to a remarkable stall. An elderly man painstakingly designs and makes exquisite furniture for baby dolls and Barbie Dolls. His wife equally painstakingly designs and sews tiny clothes, sleeping bags, duvets and other necessities for small girls and their dolls.
For R300 I bought a wardrobe and 6 perfectly made little outfits, including a wedding dress. Unlike the cheap and nasty Toys R Us clothes, they don’t fall apart as soon as Barbie is dressed up and they cost a damn sight less.
I highly recommend him to every mother of a small child who balks at the idea of buying yet another Barbie. Lexi unwrapped her gifts this morning in total rapture.

I also got out of baking a million cupcakes by strolling into Mother Hubbard’s in the mall and purchasing for R70 a Happy Birthday cake for her school birthday ring.
Far less stressful.
This afternoon I will pick up little karate kid and take her out for ice-cream with sprinkles on.
Heaven.
And when we get home Lexi can model the pretty clothes purchased on her shopping experience with my  mom – from Zara no less!